skip to main | skip to sidebar

Tennis can damage your hearing

As Wimbledon calls ‘Play’ this year, the International Tennis Federation (ITF) is considering whether to make “noise hindrance” part of its code of conduct.

The issue of noise in tennis matches has been championed by Martina Navratilova who says: "Grunting, screeching, shrieking - I call it cheating and it’s got to stop. I started having issues with it when I was playing Monica Seles back in the early 1990s. She was one of the first, and I didn’t like it one bit. It affected my game because to me it is important to hear the ball hit the racquet. Rules must be changed: players must be warned. If they don’t stop, they must have points deducted”.

Maria Sharapova has thus far held the crown as the loudest player in the post-Seles era. However there is a new kid on the block who seems to have (literally) taken the practice to a whole new level. In the recent French Open, Aravane Rezai complained to the umpire about the shrieks coming from 16-year-old player Michelle Larcher de Brito, who has now been given a wildcard into Wimbledon, much to the joy of the British media. It's not just the level of her cries, it’s also the length of them that is causing concern. Tennis officials are now considering a proposal to make noise hindrance part of the International Tennis Federation’s code of conduct, which could mean noisy players being muted permanently.

The response from the playing community has been that it is always been part of their game and that there should not be any restrictions on the release of energy. Larcher de Brito for example says "If they made a rule that you're not allowed to shriek or scream or grunt, it wouldn't be fair because it's part of the game. I'm 16, I'm still learning. Maybe I can eventually put it under control. I hope not because it comes from Monica Seles, it comes from Sharapova, it comes from really great players." Others, such as Nick Bollettieri who has produced Seles among others maintain that it is within the rules and nobody can say that loud players have cheated.

So here is the countdown of the five loudest players in modern tennis  and their noise output (bear in mind that past 85 decibels is the point where your hearing can be damaged by continuous exposure and earplugs are recommended):

Surely this presents a great merchandising opportunity for this year’s Wimbledon along with the usual strawberries and cream – purple and green earplugs for those in the front rows.

Posted by Julian Treasure at 15:29 0 comments

Chairman of The Sound Agency

Author of the book Sound Business 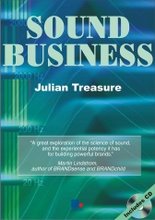